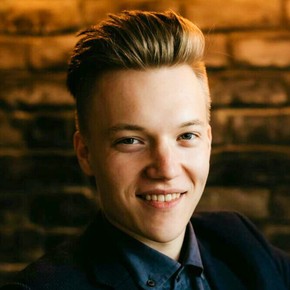 Sergey Rayman was born in 1996 in the city of Kineshma (Ivanovo Region). In his childhood he was fond of skiing. After high school he took construction courses at a technical school; he became a specialist in interior craftsmanship. His fascination with video recording turned into a hobby. In addition, Sergey loves to cook exotic food for his family and friends.

He learned to love and respect the Bible especially from his grandmother. Sergey has always loved the warm company of like-minded friends. In 2013 he met his future wife, Valeriya. They got married in 2015 and began to live in Kostroma.

In the early morning of 25 July 2018 armed Special Forces broke down the door to their flat, using crowbars in full view of the surveillance cameras. The young couple learned that a criminal case had been initiated against them because of their faith. Both of them were arrested; Sergey was sent to a detention centre for two months.

What happened has greatly affected the emotional and physical condition of Sergey and Valeriya. Their families and friends worry about them and try to support them.

Rayman Valeriya
Райман Валерия
Номер уголовного дела:
11802340011000073
В чем подозревается:
according to the investigation they participated in religious services, which is interpreted as organising and participating in the activities of an extremist organisation (with reference to the decision of the Russian Supreme Court on the liquidation of all 396 registered organisations of Jehovah’s Witnesses).
Регион:
Kostroma Region
Номер дела в суде:
1-322/2019
Расследует:
Investigative Department for the Tsentralniy District of the Investigative Directorate of the Investigative Committee of the Russian Federation for the Kostroma Region
Населенный пункт:
Kostroma
Текущая стадия дела:
приговор вступил в силу
Возбуждено:
24 July 2018