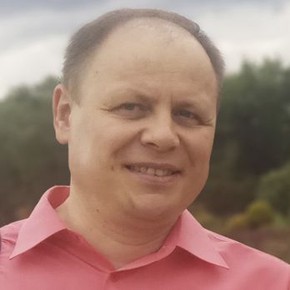 Aleksandr Solovyev was born in 1970 in the village of Kazarma (Perm Territory). Ever since childhood his interests have been sports, fiction and ancient history.

Aleksandr lost his parents at an early age: his father — when he was only one year old, and his mother — when he was 18. After the death of his mother he left his studies at the Polytechnic Institute and went in the army. He worked as assistant locomotive operator and inspector of communication services supervision.

Later, Aleksandr moved to Perm and there became more acquainted with Bible teachings. Although he did not believe in God, he thought much about the origin and meaning of life. Aleksandr with the help of a childhood friend discovered to his surprise that the Bible is not “a collection of prayers for grandmas”, but a logical book that gives clear answers to questions.

In 2001 he married Anna, whose work is connected with music. They have a strong family because of studying the Bible together. The both enjoy music and sports, and love to help friends organise their weddings.

Aleksandr’s relatives and friends, even those who do not share his religious views, are in completely bewildered by the criminal case opened against him. They know that Aleksandr has nothing to do with extremism.