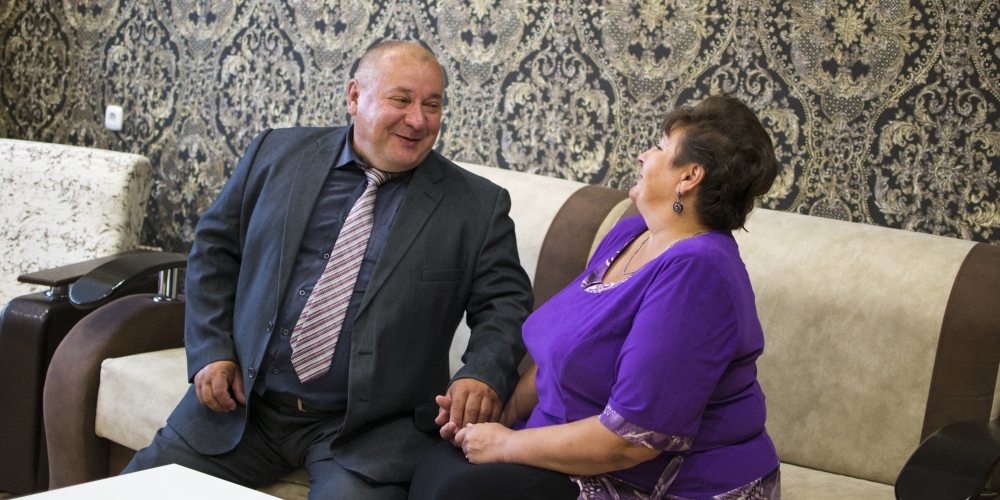 Sergey Skrynnikov is the second of Jehovah's Witnesses in the city of Oryol caught in the millstones of persecution for his faith. What helps him not to give up? What was his way to faith? What is his reaction to criminal prosecution?

Sergey first came in contact with Jehovah's Witnesses in 1973, when he was 11 years old. The family lived in a small village in eastern Ukraine. Under the conditions of Soviet anti-religious propaganda, his mother began studying the Bible with Jehovah's Witnesses. From her, then, Sergey first heard about God, about his Son and his Gospel. Since then he never doubted the truth of God's Word, this knowledge deeply embedded in his heart. But knowledge of the truth obliged him to build his life in harmony with God’s high standards. He was not ready for this at the time, and his life became a bad scenario. At the age of 25 he already abused alcohol, lost his job, lost his family and decided to return to his mother in his native village, Manuylovka.

How did Sergey come to this faith? His mother had underground publications of Awake! magazine, and she specifically left them for Sergey in the house. He gradually rethought his life, realizing that he heard what the Creator said, but he had not listened. So he began an intensive study of the Bible. He suggested to his mother to move somewhere far away from his drinking companions. They sold the house and moved to the town of Torez, where there was a community of Jehovah's Witnesses. Comparing biblical counsel with his negative experience, he came to believe truth resides in the Bible. In 1989, after a long search, he was baptized as one of Jehovah's Witnesses.

Has Sergey's life changed for the better? As mentioned, because of his riotous lifestyle, his marriage to his wife, Nina, broke up, and they divorced. After some time, Nina learned from a friend that Sergey had become one of Jehovah's Witnesses—and could not believe it. But still she decided to write him a letter. This was the first step. Nina and Sergey already had a daughter who went to the first grade without ever really knowing her father. On vacation, they would visit. Nina became interested in the Bible's message and sound advice. A year later, in 1990, she too became one of Jehovah's Witnesses. She and Sergey decided to restore the marriage, because Jehovah, the God named in the Bible, is presented as hating divorce. So the Bible is credited with saving not only Sergey, but also his marriage.

How was the further life of the family? Sergey is a physical education teacher by profession, having graduated from Bolkhov Pedagogical School. He taught at his profession, including the Oryol region. Nina is also a teacher. Somehow in her school a child was injured. Due to severe stress, Nina was paralyzed; for a year and four months she was bedridden. It was a hard time. One day, Nina suddenly said: “I want to go with you in the preaching ministry.” Sergey discouraged her, but she insisted. So he dressed her, picked her up and carried her about 20 meters to their neighbor's, where he sat her down on a bench, and she started talking about the Bible with their neighbor. After 15 minutes they returned home. The next day, exactly the same but 30 minutes. Then an hour. And so over time, she began to walk. All thanks to the ministry. Now Nina is struggling with melanoma. Observed at the oncologist, she rejoices every day.

Their daughter, Olesya, became one of Jehovah's Witnesses in 1994, and later married a fellow believer. When Sergey moved to Oryol to look after his wife's parents, Olesya and her family also moved with them, bringing four of her five children already born in Oryol. Sergey and Nina help raise their five grandchildren. Sergey calls Nina a devoted friend whose support is very important: "She knows by experience that Jehovah God is a caring and loving heavenly Father.”

The large family adapted immediately when Sergey was arrested and criminal charges were lodged against him, alleging “extremism.”

“When it all started, we were ready. Thanks to the care of Jehovah and loving elders, we were not caught off guard. The whole family quickly restructured and began to adapt to new circumstances. Nobody goes to extremes. However, sometimes in the depths of the soul you feel like a leper. You can not talk to anyone on the phone because of a possible interception. You can not go to visit your friends because of possible surveillance. It is impossible even to appear somewhere near the brothers because they will photograph us together, then the brothers will have problems. We live like in the Wild West.”

Awaiting the court's verdict, the family said they all are eager to meet what God will allow. If He permits the government to sentence Mr. Skrynnikov to prison, it means that this is God's will and a new appointment for Sergey. As his family sees it, millions of people are sitting in the prisons and have not heard anything of God’s Word. To quote Jesus Christ, “The fields are white for harvesting.” Mr. Skrynnikov says, "I am ready for everything and believe that my beloved God, Jehovah, will not forsake me. Every day he fills my heart with peace and joy, and it will always be so.”

Region:
Oryol Region
Locality:
Oryol
Case number:
11802540002000011
Current stage:
verdict took effect
Suspected of:
according to the investigation he participated in religious services, which is interpreted as participating in the activity of an extremist organisation (with reference to the decision of the Russian Supreme Court on the liquidation of all 396 registered organisations of Jehovah’s Witnesses)
Article of the Russian Criminal Code:
282.2 (2)
Investigating:
Investigative Directorate of the Investigative Committee of the Russian Federation for the Oryol Region
Case initiated:
20 February 2018
Number of the case in court:
1-121/2018
Considering on the merits:
Zheleznodorozhnyy District Court of the City of Oryol
Judge:
Gleb Borisovich Noskov