Withdrawal of the Surgut Investigation Team Urged Over Torture Reports 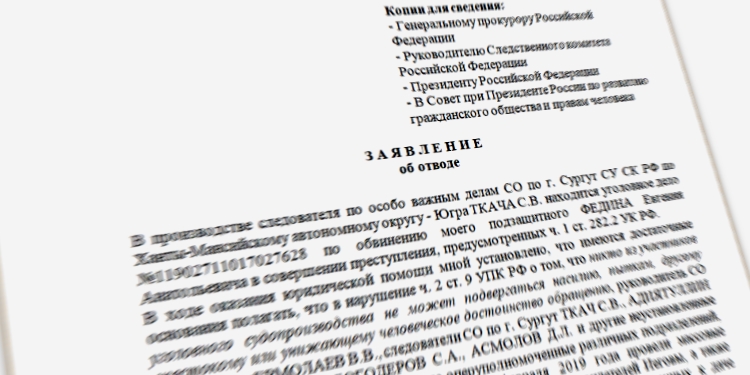 On February 20, 2019, an application was submitted to the Investigative Committee of Russia (RFIC) for the withdrawal of the Surgut investigative group, naming head of the investigative department for the city of Surgut Ermolaev, investigators Tkach, Adiyatullin, Gaisin, Bogoderov, Asmolov, and other law enforcement officials. The application stated that reasonable grounds exist that the investigators tortured Jehovah's Witnesses in their custody.

As previously reported, at least seven peaceful Jehovah's Witnesses were subjected to torture — electric shocks, suffocation and beatings carried out by those trained to inflict pain with minimal marking or evidence left behind. After being tortured, officers interrogated the Witnesses, demanding: “Where are the meetings of Jehovah’s Witnesses held? Who attends the meetings? What are the elders’ last names? What is your mobile phone password?”

Previously, one believer turned to the RFIC hotline to report torture, but this only led to his arrest. On February 16, 2019, the hotline received a request to open an investigation against Dmitry Leonidovich Asmolov, investigator of the Surgut Department of the RFIC, because of torture that took place during the intervals between his interrogations.

After the torture of 57-year-old Sergey Loginov was reported to the hotline, he was immediately released, but shortly thereafter he was again detained and then forced to write under torture a statement claiming that no one had tortured him. He remains in detention. No further information has been provided regarding the current situation of Mr. Loginov, nor the other two men arrested after the initial interrogations, 42-year-old Yevgeny Fedin, and 52-year-old Arthur Severinchik.

Region:
Khanty-Mansi Autonomous Area
Locality:
Surgut
Case number:
11902711017027628
Current stage:
preliminary investigation
Suspected of:
delivering speeches, engaging in the Witnesses' public preaching activity with local members, meeting with Bible education volunteers and appointed congregation assistants, and having as one objective the organizing of appointed men in the Vzlyotnove Congregation
Investigating:
Investigative Department of the city of Surgut of the Investigative Directorate of the Investigative Committee of the Russian Federation for the Khanty-Mansi Region
Case initiated:
11 February 2019

Read more: Lipetsk Region Became the 49th Region of Russia Where Witnesses Are Persecuted: Three Men Are Detained, a Woman Is Injured

Lipetsk Region Became the 49th Region of Russia Where Witnesses Are Persecuted: Three Men Are Detained, a Woman Is Injured
The Health of a 68-Year-Old Witness From Sochi Worsened to a Threatening Condition in Armavir Pre-Trial Detention Center
“We must get to the bottom of the truth.” In Surgut, the Head of the Human Rights Council Interviewed Witnesses Who Were Tortured​
At Least 13 Witnesses Detained Near Nizhny Novgorod
In Kaluga, Witness Received Inhuman Treatment in FSB Building